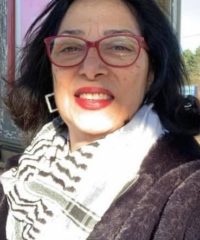 First of all, since 1999, I worked on ‘Palestine TV’ as a TV presenter. On this channel I had my own
live talk shows that specialized in women and children issues. Items covered were focused on
Gaza and other countries in the Arab world.
In that organization I was promoted to be ‘Head of European and Arabic files’ in the
International Relations department. I was the Palestinian local liaison officer responsible for news
exchange with ‘Eurovision’ and ‘ERNO’ (Eurovision Regional News Exchange for South-East
Europe) the two main circuits for news exchange that provide news to agencies throughout
Europe.
I was trained in Sarajevoby ERNO and for many years I attended the workshops in different
European cities concerning the news exchange between both regions. Moreover, I was responsible
for providing in-house training for Palestine TV for different departments to enhance their skills.
I gave training on a multitude of topics such as sound and light systems, news desk, digital
narrations and changing Palestine TV from analog to digital systems.
I also had several short and long term positions in other media organizations such as Al Jazeera children channal, Ramattan and the third channel of Malaysian TV.
I experienced working as a correspondent for ‘Al Jazeera Children’ for four years for which I was
trained at Al Jazeera children headquarters in Doha, Qatar. Furthermore, I covered the aftermaths of the
first war in 2009 for a specialized channel of Al Jazeera, El Fakhouar. This one week project was
very intensive and working under time constraint was a must. Specifically in that position I wrote
reports, news stories and did legislative work. I was going live from 3 pm until 9 pm, continuously
reporting, in an uninterrupted manner. After 9 at night, I started preparing interviews and
collecting information to prepare for the next day.
At another agency, Ramattan News Agency in Gaza, I worked as a producer, as a correspondent
and finally on the news desk.
As well as my journalism work on television, I worked on other media outlets such as radio and
film. I worked for Gaza SM Radio that aired my live shows on topics related to female gender issues
and I had several assignments as a freelance movie maker specialized in low-budget
documentaries.
Besides the journalism work, I have been privileged to acquire some teaching experience in the
field. I taught journalism in Gaza Polytechnic University. The courses I gave were ‘Specialized
Journalism’, ‘Management of Journalism Houses’ and ‘Editing for newspapers and television’
I have also written and published on Donia Al Watan News Site.
Participating and organizing conferences and workshops specialized in political current affairs,  Feminism and young women journalists’ training.